We left Carcassone, France at 5:45 a.m. to make our way into Spain. We ended up arriving in Barcelona early. In Spain, on most daytime train routes you must have a reservation. So we spent a couple hours waiting in a huge line and made all of our reservations for our travels in Spain. This was pretty stressful because the young lady who made the reservations for us knew about as much English as Brian knew Spanish. But she was very helpful. 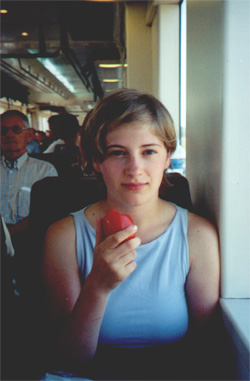 July 27, 2001: Katie Miller eating a tomato on the train to Barcelona

Our hotel room, notice the shower next to the bed

The hallway in the hotel 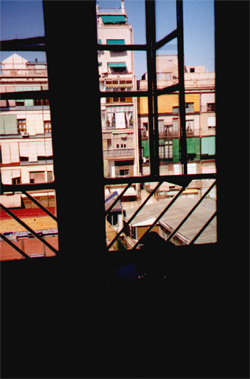 The view from our hotel window

We then headed for our hotel, Hostel Girona and took a 3-hour nap. We ate paella (rice and vegetables) and sangria for our first dinner in Spain. Then we walked around Las Ramblas (series of pedestrian-oriented boulevards) before going back to the hotel. 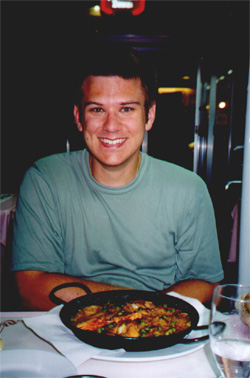 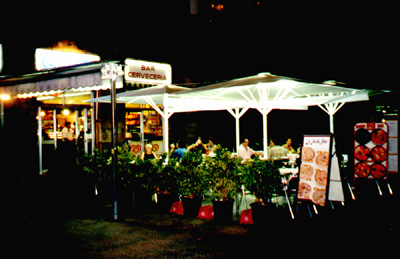 The restaurant where we ate dinner

The next day we ate in a little cafe-restaurant-bar. I (Katie) didn’t feel good, but ate anyway. We left and I then proceeded to throw up on the street in a construction-garbage-heap. Pretty classy. 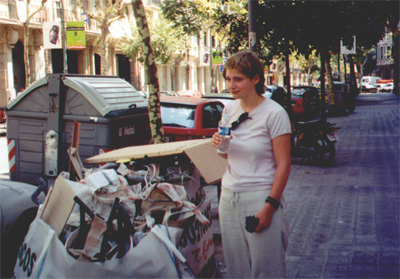 Then we went back to our hotel, so I didn’t throw up anymore. After resting, we headed back out to finally see some Gaudi. Antonio Gaudi is Barcelona’s most famous architect. Born in 1852, he is known for his warped form of Art Nouveau/Gothic architecture.

We saw Manzana de la Discordia, which are two Gaudi houses next to each other, including Casa Batllo. We also saw Casa Mila, which he too designed. Then we ate dinner at an Italian restaurant named, Kansas. 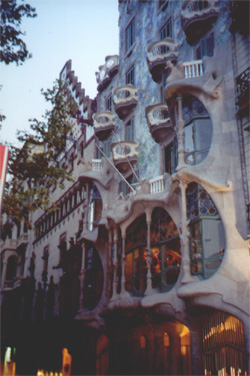 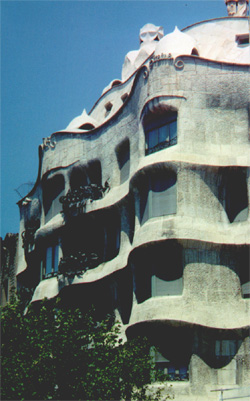 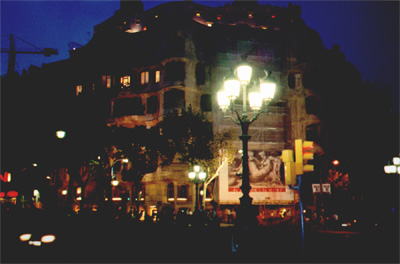 The next day we decided to rest our feet and try out a tourist bus. We rode it to the Temple de la Sagrada Familia (Church of the Holy Family), which is Gaudi’s still controversial unfinished work. 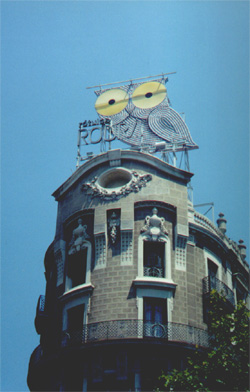 The top of a building 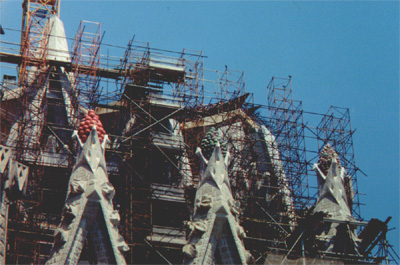 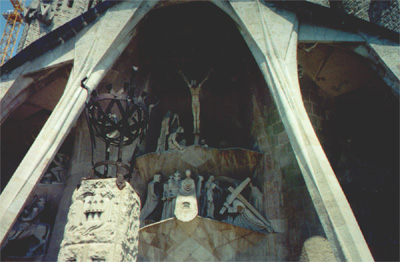 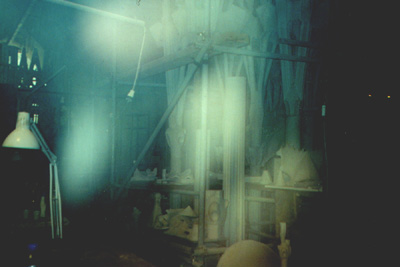 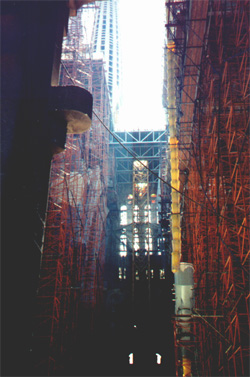 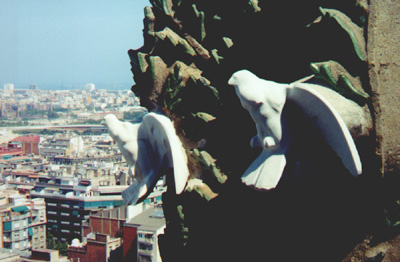 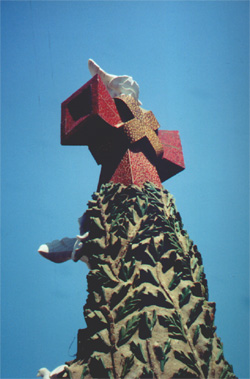 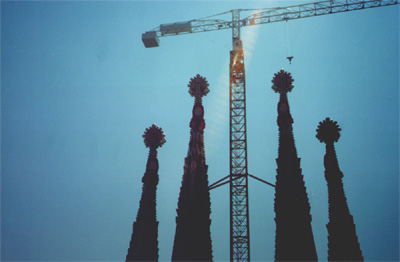 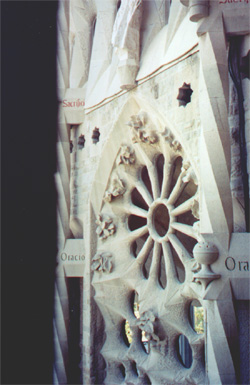 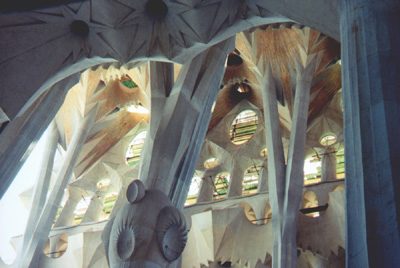 Then we took the tourist bus to Parc Guell, a park complex of towers, galleries, pavilions and decorative landscaping on a hill overlooking Barcelona. We sat on the longest park bench in the world! 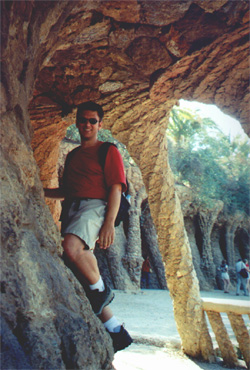 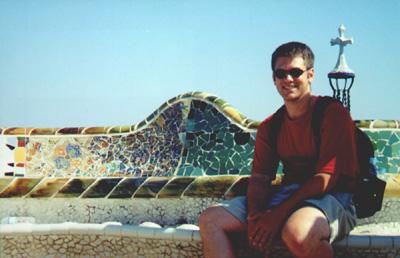 We ate lunch in Parc Guell, and took our cheesy-poofs on the bus with us. But we got yelled at for that! No food on the tourist bus!! 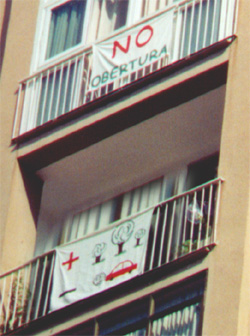 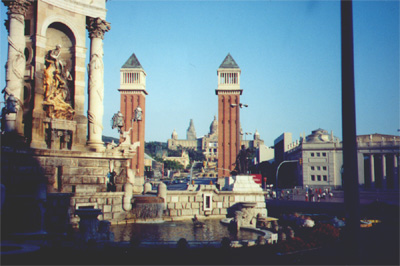 We rode by the Port of Barcelona and all the Olympic arenas from 1992. We found a movie theatre playing English movies with Spanish subtitles. So we ate dinner quickly at a Spanish fast food restaurant called, Bocatta. They had toasted subs, french fries, and good salads. Then we bought tickets for Pearl Harbor. Then we had to walk home because all the subways were closed. We saw 2 hookers, 1 stinky zoo, and 2 men peeing, on the walk home. 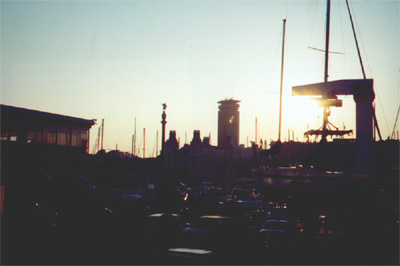 The Port of Barcelona

The next day we packed up and sadly moved onto Madrid. We definitely could have stayed longer.