We took an early train to Pisa, where we were going to stop on our way to Finale Ligure. We arrived with little trouble in Pisa and caught a bus to the tower. We saw the tower (and the throngs of tourists) and then headed back to the bus stop. 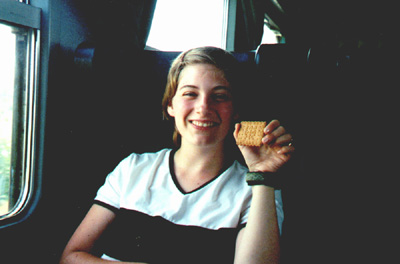 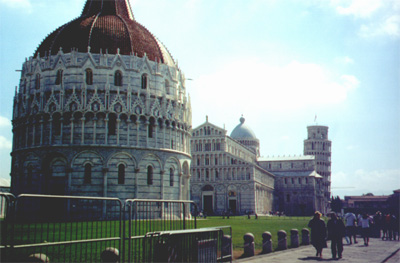 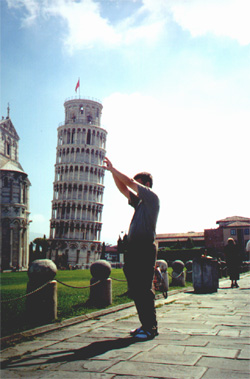 Brian Kleinman and the Pisa photo 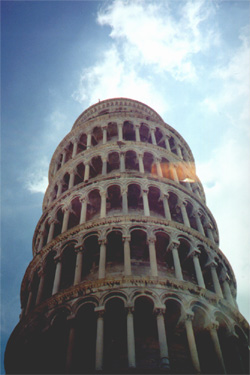 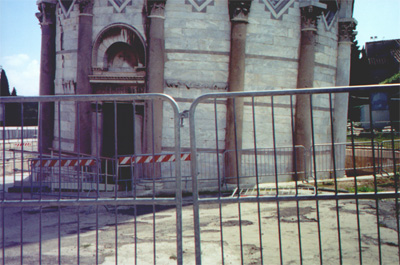 The bottom of the Pisa Campanile (tower) 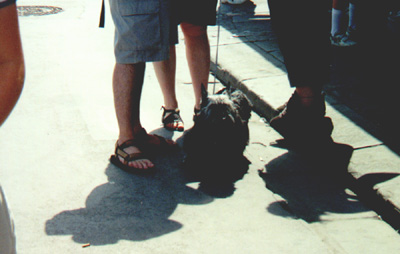 A scottie in Pisa! (hi Abby) 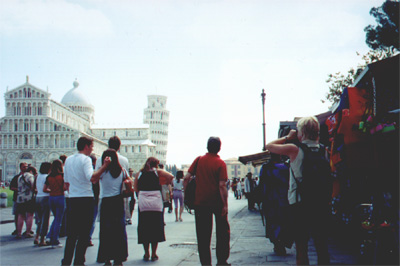 The crowd surrounding the Pisa monuments

There was a lot of confusion about the buses and we had to wait awhile for the correct bus back to the Pisa train station, which was bad because we needed to catch a train soon. While waiting for the bus we discovered what was worse than American teenagers, Italian teenagers, they had firecrackers at the bus stop. The bus finally came, and bought with it a new character. A woman in a plaid skirt who kept saying, “I am a tourist and I need my tour bus.” Well, the city bus driver was little help to her. So we ran off the bus and ran to get our bags, which we had locked in a locker, and ran to catch our train. 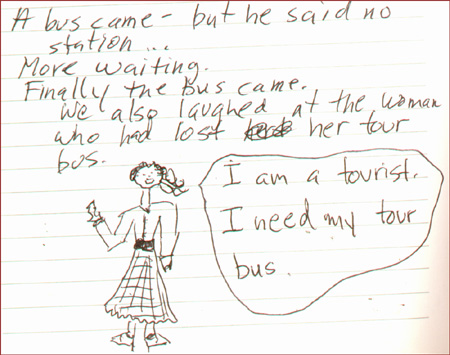 Our drawing from our journal of the stranded tourist 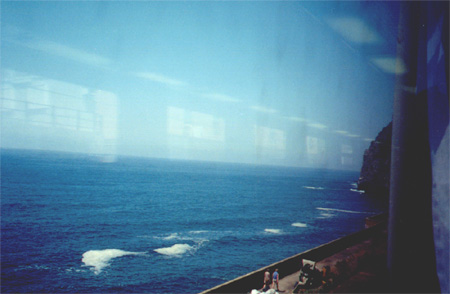 The view from the train on our way to Finale Ligure

So we took a train to Genova Nervi (Genoa), where we began to realize that going through Genoa was going to be hard because this was July 21, 2001, the weekend of the Genoa G8 summit. To get through Genoa, we would be rerouted with trains and buses around the city. 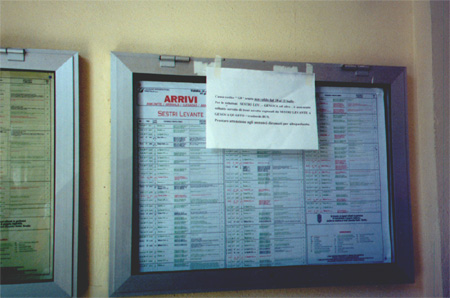 A sign in Genoa, Italy, explaining the rerouting procedures to reroute people around Genoa

There were protestors on the train with us and when we got to Genoa Nervi, they ran to catch taxis into the city. We were bused to the Genoa Voltri train station. We then took a train to Savonna and then to Finale Ligure. We were very glad to arrive. We took a much needed nap and then walked along the boardwalk, where we also ate dinner. 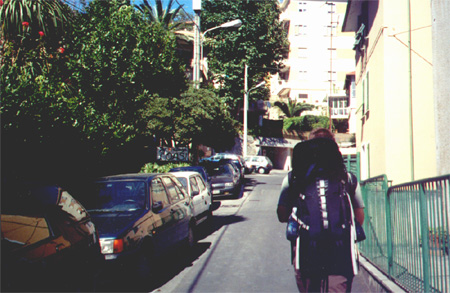 Brian Kleinman hiking to our hotel 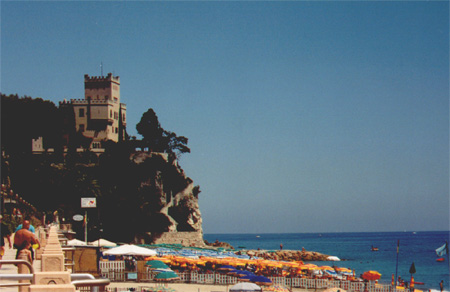 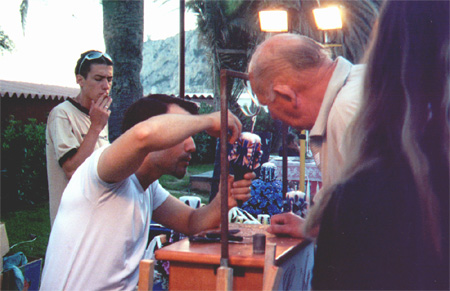 A candlemaker along the Finale Ligure boardwalk 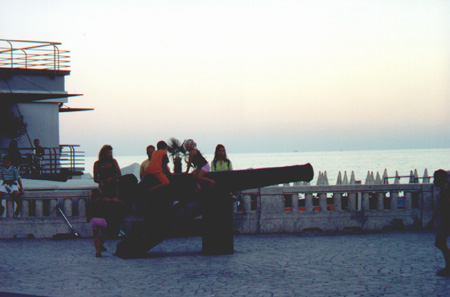 Kids playing along the boardwalk 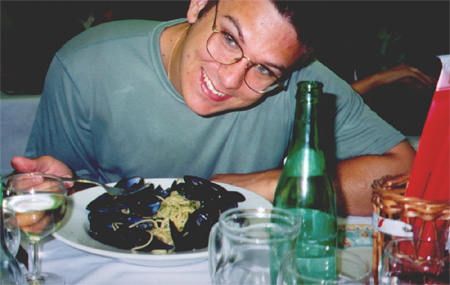 Brian Kleinman with his mussels dinner

The next day we relaxed at the beach all day. At the restaurant where we ate dinner, Brian ordered “fried fish.” It was a wide assortment of fried seafood, eyes, tails, and all. We fed some to a cat that kept coming up to us. 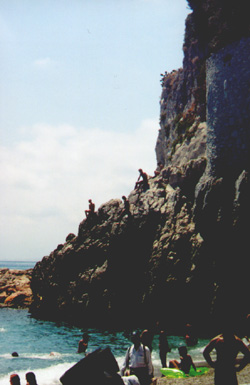 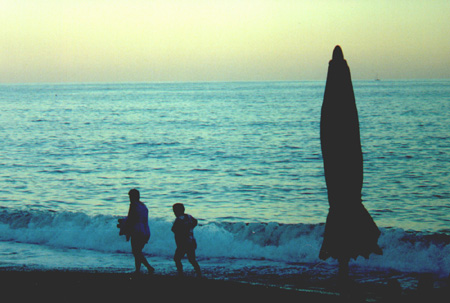 Women walking along the beach at night 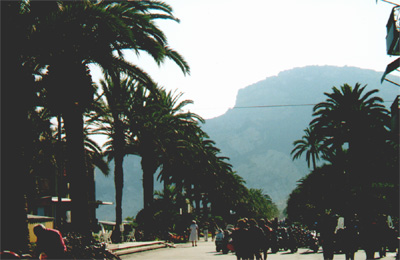 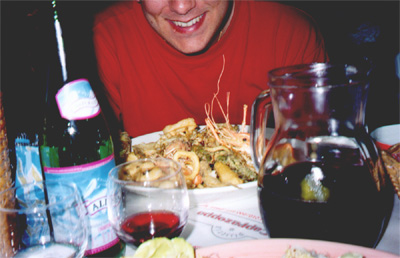 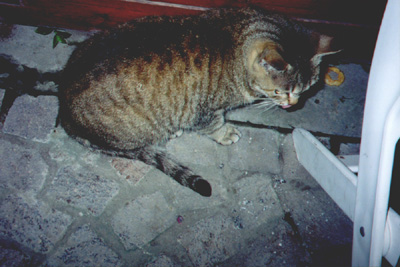 The cat who also ate the fried fish dinner

We called home and got ready for the next day where we would travel to Monaco. 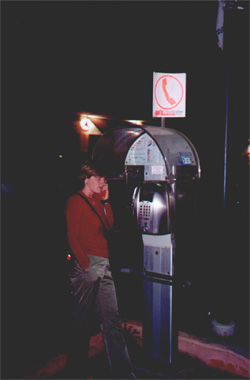 Katie Miller talking on the phone to home